Redemption at the Rudder Club of Jacksonville

At the 2019 Gator Bowl Regatta, I was served a giant humble sandwich.   As I explained in last year’s blog article, I got schooled tidal currents.   It was ugly.  Sailing against all those Florida hot shots is difficult enough without the added challenge.  I left that regatta more than a little frustrated and little embarrassed by my performance.   Of course, we go to regattas to get better and sometimes we learn the most from our worst regattas.  That said, I’ve carried a rather large chip on my shoulder since my last trip to Jacksonville and I was eager for a chance at redemption.  At the same time, no matter how bad things go at the Rudder Club, they have a full service bar in their clubhouse.

Rick Wojnar from CLSA agreed to crew for me and we left on Thursday evening and drove through the night.  We arrived in time to set up the boat, take a little nap, and attend the welcome party hosted by Jon and Donna.   This year we would have 4! boats from CLSA competing in the regatta.  Mark and Michele Taylor are Florida resident CLSA members who we always look forward to seeing on the Florida Circuit.  Ben Williams and Deb Aronson showed up after deciding they weren’t going to let us have all the fun in Florida this winter.  Jamie Rimovski very recently moved to to the Gulf Coast and recruited Susan McIntyre to fly down and crew for her.  As an added bonus, Tom and Debbie Yeagle paid us a visit on Saturday night and we met for breakfast on Sunday morning.  It almost seemed like a CLSA social event. 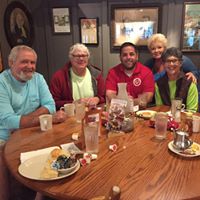 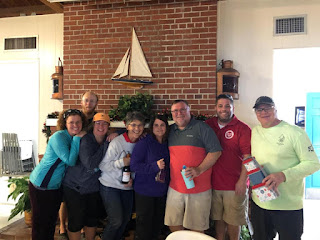 Jon and Donna of the Rudder Club once again hosted the Flying Scot sailors at their place on Friday evening and it is always great catching up with friends at these things.   I left at a reasonable time, but Jamie, Susan and Rick closed down the party.  Poor Jon and Donna had to wake up Rick (he was sleeping on the couch) and kick the  CLSA partiers out so they could get to bed at a reasonable time.  :-)  There may have been reports of “sea sickness” on Jamie’s boat on Saturday.  LOL.

Unlike last year, we sailed great.   We lived in the lead pack and hung out in the Top 5 all regatta long.  We were consistent and kept things simple.  We sailed fast and put together a very solid and consistent performance.  We were in a three-way tie for fifth place after the first day, just two points behind Ben and Deb in fourth.   Ben and Deb scored a bullet (first place) in the second race!  That’s a big deal in that caliber of fleet.  We would finish the regatta strong with two P5s on Sunday!  Congrats to Ben and Deb, with a 4th place overall finish.   Mark and Michele rebounded from a bad race on the first day to finish third overall.   Way to go team!

Honorable mention goes to Jamie and Susan.  They kept up with the pack, which was stacked with championship fleet quality racers.  Rick and I were very impressed after every race because they were right there at the finish line.  Jamie was recovering from back issues, and went out on Sunday despite not feeling well on Sunday morning and in spite of near white cap conditions in the morning.

We would finish the regatta in 10th after being scored OCS in the first race, which took away a 7th place finish in the first race and added 9 more points.  The scores posted on Saturday night did not show us OCS even though several people mentioned they heard 6135 (our sail number) called on the radio.  There was nothing posted on the notice board on Sunday morning, so I just assumed the race committee realized they broke rule 84 by not flying an orange flag that first race.  I was covered by most of the fleet on the first start and had a really bad start, so I struggled to understand how I could even be in the conversation.  The final results were posted and showed several us as OCS in the first race and we all filed for redress.  In the redress hearing, the race committee volunteer testified they were flying the orange flag that first race and also kept the X Flag raised that entire race.  We all took the guy’s word for it.  Our request would be denied.  Later that night I would watch the start, which I recorded on my GoVision glasses.  I cringed when I watched the video, which confirmed they called our number :35 seconds after the start, but also confirmed there was no orange flag and strongly suggests I was not OCS at the start.  I’ve been playing organized sports all my life.  The only thing you can do when the referee makes a questionable call is to move on.

You always think about what could have been if you didn't make that mistake or two.   We would have finished 4th if not for that OCS situation.  Furthermore, if my centerboard hand’t snagged the anchor line on the gate in the first race, I would not have been required to do that penalty turn which cost us those three positions.   Without these two situations, we would have finished the regatta in 2nd place.  The goal for every regatta is to sail consistently well and always be in the lead pack.   My boat is called Wildcard for a good reason.  Everyone has seen my neon spinnaker in the front plenty of times, but they also notice it in the back more regularly than I’d like to admit.  At Ephraim, I finished 2-22-2-22.  That's just not right.  I’m hoping that after the 2020 season, I’ll need to buy a new boat because the Wildcard moniker will no be applicable.  So far, so good. 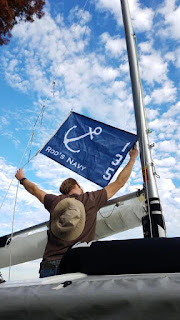 Posted by Eric Bussell at 4:27 AM 0 comments

Light shifty winds but we got in three good races

Ben and I had never been to Corinthian Sailing Club in Dallas, despite knowing so many people whose home club it is. Texans go big, as we all know, and that is certainly true with the Flying Scot population at the club. With 150-160 Flying Scots at the club, it was an impressive sight. Corinthian, which is celebrating its 80th anniversary, is clearly a solid one-design club, to the point they are a little worried they are crowding out other boats!!

The number of boats was especially dramatic because they are all moored on these beautiful davits. Each member owns the davit, just like they own their own boat. There is some payment for upkeep of the dock walkways and the owner is responsible for maintaining their own davit. It means you can show up, lower the davit, jump in your boat and away you go. I have been to other clubs that have this system, Cowan Lake comes to mind, but never one that has so many boats. It's eye-popping!

I've also never been to a club, that I remember, whose clubhouse is IN THE WATER. Apparently, because park land surrounds the lake, which used to provide drinking water for the city, buildings were forbidden. But somehow, it was okay to build out into the water. So as the club has expanded, it builds another large pier out into the lake. I counted three. It is lovely to be surrounded by water, though I gather it's a pain when the lake floods, as it often does. Another wonderful feature of this lake is that motorboats are prohibited. It's a sailor's dream!

I never doubted that the Corinthian crew would be generous hosts, but several sailors went so far as move their own boats off their davits to make way for the visiting boats. They even made up ID cards for us at our assigned davit. These organizers thought of everything!

Still, even with the can-do organizing team of Nina Cummings, Bowman O'Connor, Red Dog Jones and countless others, the wind was not as Texas-sized as they would have liked. The race committee, bless their hearts, kept us in the shade and near the water, gatorade, etc as they hunted for wind. Racing was supposed to start at 10 a.m. Instead they held off until after lunch (a quick aside, the food this weekend was unbelievable, courtesy of Audrey Duffell, a professional chef, who made even sandwiches a work of art and deliciousness, but lest you get the wrong idea, dinner was shrimp AND steak and too many amazing side dishes to list).

And still there was no wind. But wait ...  just about 2 pm, when many groups would call it a day so as not to interfere with dinner schedules, the race committee decided some wind might be coming. Down came the AP flag, we all headed to our boats and sailed to the course [ the lake is not large and it only took 10 minutes or so to get there]. Lo and behold, there was wind. It came and went, but it was mostly there. Sometimes the velocity changes were such that you went from bobbing to hiking and pulling on the vang and dumping the main in a blink. And the wind direction shifted sometimes as much as 50 degrees in a moment, but it was wind!

The first start resulted in a general recall but after that, with some line adjustments, the 20 or so Championship fleet boats got off without a hitch.  The race committee did a masterful job all around.

There also was a 10-boat, no spinnaker division and a five-boat, challenger fleet that competed. I was very pleased to see the non-spinnaker division and its popularity. I can't remember how often that is offered but I think it gets back to the original intent of the event and I applaud it!

Still, for lake sailors like us, these are our conditions. I can imagine those coastal sailors used to steady sea breezes this was even more frustrating than for the rest of us, but somehow the heat did not bother me, and I felt more energized at the end of the day's racing than I ever remember feeling. Perhaps the fact that Ben and I have not been able to race in as many regattas this year is not a bad thing.


Yes, Ben is drenched in sweat, but he is happy! Also, notice more boats on davits behind us.

The first race Ryan and Stacey won. Woot Woot!! But CSC sailors (and former national champs) Kelly and Heidi Gough dominated with a 2, 1, 2. Bill and Jennifer Draheim tried to keep up, and then came the rest of us. By the end of the afternoon — we raced until about 6 I think — we'd done three four-leg races, each about 45 minutes or so. Perfect, IMHO.

Everyone except the top two boats had at least one double-digit finish, which tells you how tough both the fleet and the conditions were. Also, only 18 points separated the 2nd place from the 11th place finishers. That is close racing!

Saturday's dinner, as mentioned, was a work of art and the weather had cooled enough that, with the help of some enormous fans to move the air, sitting outside was lovely. The Corinthian fleet held a silent auction of countless sailbags provided by Sea Bags. Proceeds supported the junior program.

Sadly, Sunday's wind never materialized and so, after we waited two hours for it to show up, while enjoying Audrey's delicious and decadent breakfast and bottomless cups of coffee, the committee called it a day and distributed recognitions and trophies. I imagine the incomparable Diane Kampf will get those posted on the FSSA website shortly.

Corinthian is a marvelous place and full of so many one-design-loving sailors that I know Ben and I will be back! Thank you again to all the volunteers that make this kind of event happen. You all deserve kudos and some R&R!